Kendra Rubin ’12: From ‘Rising Star’ to VP of Governmental Affairs 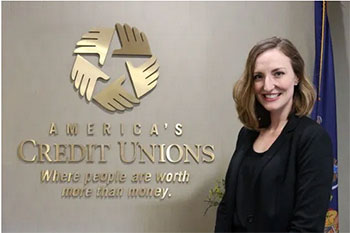 In her job as vice president of governmental affairs with the New York State Credit Union Association, Rubin advocates for the success of credit unions throughout the Empire State.  In 2019, Governor Andrew Cuomo ‘82 signed the Banking Development Districts bill—allowing credit unions to access the Banking Development Districts Program, which encourages financial institutions to open branches in areas where there is a demonstrated need for banking services—into law. Rubin led the negotiations on the bill, which was at a standstill for at least two decades prior.

A credit union establishing itself in an underserved neighborhood can provide jobs, access to financial services, and opportunities for loans and grants, Rubin said.

Before her post with the credit union association, she served in the New York Department of Health as deputy director of the Bureau of Program Counsel. Prior to that, she worked her way up the ranks in the governor’s office, including as assistant counsel to the governor, and ultimately as a member of the governor’s senior staff as director of appointments.

Rubin started gaining traction in state government while attending Albany Law School. As a 3L, she was faced with two internships offers: one in private practice and one with the governor’s office. She chose Gov. Cuomo’s office—a decision she pinpointed as the moment her zeal for government work began.

“I can unequivocally say that the opportunities I had access to because of Albany Law School completely changed the course of my life,” she said.

Rubin never wanted to be a lawyer in the traditional sense. But knew she wanted to earn an advanced degree after her undergraduate studies in communications and rhetoric at the University at Albany.

There, she got a brief taste of government work during an internship in then–Attorney General Andrew Cuomo’s press office. While being a news reporter turned out not to be the right fit, the experience got the sparks flying for her future in public service.

“Albany Law—being situated where it is in the capital of New York—really ignited a passion for government that I still have to this day,” she said.

While at Albany Law School, Rubin was president of the Pro Bono Society and was a recipient of the prestigious Edgar ’46 & Margaret Sandman Fellowship. Post-graduation, she was given Albany Law School’s Rising Star in Government Award (2017) and was named to City & State’s 40 under 40 list (2019).