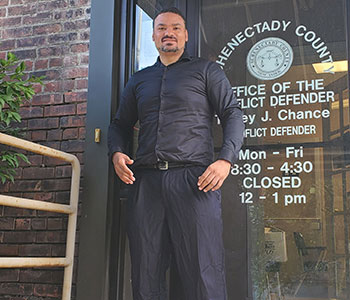 “Surreal,” is how Aaron-Jason Enous ’19 describes his budding legal career.

Enous, known as AJ to his friends, is an assistant conflict defender in the Schenectady County Conflict Defender’s Office.

“I love what I do. If I could have prayed for the perfect position, the environment I work in is probably more fulfilling than that,” he said. “Surreal is the only word.”

Enous’ hyperbolic description is because the position seemed so far away, nearly a decade ago, after he failed the LSAT the first time he took it. The setback wasn’t for lack of trying either. He grew up in Schenectady’s Hamilton Hill neighborhood as the youngest of four children. Some of his childhood was spent in foster care, then at age 8 he lived with his mother again until about 16. As a teen, he got his own apartment and put himself through high school. Then, after graduating from Schenectady High School, Enous earned a criminal justice degree from Bryant & Stratton College and a history degree from The Sage Colleges in 2010. But after stumbling on the LSAT, he almost gave up his aspirations of becoming a lawyer.

“When I was a kid, they told us to get a degree and you’ll find a nice job. A bachelor’s degree could get you a living wage when I was younger,,” he said. “I figured out for myself that I wanted to do more.”

The Great Recession was at its peak in 2010 and jobs were hard to find. Enous made the tough decision to put his ambitions on hold and forego another run at the LSAT at the time. Instead, he trained with Job Corps, a career training program administered by the U.S. Department of Labor. He eventually found a job in a New York State juvenile detention facility.. It was stressful and far from his dream.

After his mother died in 2016 due to complications from heart problems and with encouragement from friends and mentors, Enous decided it was time to recommit to his goal and take the LSAT again. He wanted to honor his mother’s life and forge a better path for himself and his five children.

This time he passed, and was admitted to Albany Law School’s four-year J.D. program.

Law school was tough at first, but as Enous put in the work his grades improved and he finished his degree in two and a half years.

“I had faith in the impossible, now I live the impossible every day,” he said. “When you’re in the trenches, it can be hard to see the other side but then when you graduate and look back you realize there were some beautiful moments where I grew as a person.”

Enous considers himself a spiritual person and having that faith guided him. It still does today.

“I had this thought,” he said about a moment of clarity during his early days at Albany Law. “Just because I’m a seed today, doesn’t mean I won’t be a tree tomorrow. A seed has all the potential to become a tree.”

Enous passed the bar exam in February 2020 – on his first try – but his dream was stalled again as his job search was held up by the COVID-19 pandemic. Luckily, when restrictions eased in July, he started in the Schenectady County Conflict Defender’s Office.

Even if his current position seems surreal to him, Enous is now making a real impact in his own community.

“As a kid, I figured out that I had to do something affirmative with my life or I was going to end up in a jail cell,” he said. “As a kid I had seen so much already that I figured that out. School was the way to make sure that didn’t happen – and being a lawyer doing this kind of work to help others is a dream come true.”