Life rarely goes as we plan it. Ronald Jay Cristal ’66 knows that sentiment to be true.

After graduation from Albany Law School, he took a job with the State University of New York (SUNY) system as in-house counsel, where he planned to stay for many years and start a life in the Capital Region.

But young men were needed in the Vietnam War and he volunteered for the US Air Force—thinking he might be able to offer his legal knowledge somewhere along the way. He was stationed near Sault Ste. Marie, Michigan, at first. The city’s proximity to the Canadian border brought a chill he can recall decades later.

“I remember that day exactly, when it got 40 below zero, I thought, ‘I have to get out of here,’” he said. “The only place to go was Vietnam. If you volunteered, they took you.”

Though warmer, Vietnam presented other, more serious difficulties. When the Air Force’s need arose for a lawyer in Thailand, he jumped at the chance.

“I went to become a judge advocate—a military lawyer,” he said.

That day was the start of his now 40-plus year legal career in Thailand. From 1979 to 1988, he served as  managing director of Leo Trustee Company Limited. In 1988, he was appointed managing director of Freehills’ Thailand office. The office was renamed Bangkok International Associates—where he still works today. 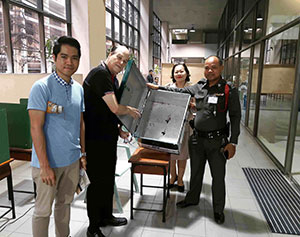 Cristal works in numerous areas of law ranging from corporate tax issues to Foreign Business Act cases, but specializes in commercial and residential property, banking, taxation, nationality, and wills. He is admitted to the New York and Guam bars.

Though Thailand’s legal system has some differences from the United States, Cristal said there are many similarities.

“Many of the concepts are the same here. People get arrested, you have preliminary hearings, you have trials, cross examination, tax issues, immigration, wills—everything that you would learn in law school we have here,” he said.

He hasn’t returned to the United States, aside from some time in Guam when he worked as an Assistant Attorney General and spent time alongside his mother in her final days.

He’s made the most of the unexpected. He lives in a robust business center in Bangkok, Thailand, with more than 100 food sellers situated between his office and home—as well as culture and nightlife all within reach. He spends time helping charitable organizations such as the Jewish Association and served as a lecturer at Bangkok University. He’s also a ballot-box checker for his Thai voting district.

He does business under his Thai name—Ronachai Krisadaolarn—and speaks on Thai coinage and medals. He’s become an internationally recognized as an expert on Thai coins—his appearances have included the opening of the Royal Thai Mint in 2003, where he exhibited some of his collection and gave a lecture.

“I didn’t know anything about Thailand. Once, when I was about 10 years old, I remember seeing a program on TV where they showed the Grand Palace and how things were,” he said. “I thought I couldn’t even imagine getting to England. Now, I get on the train a few stops and I’m at the Grand Palace.”

He’s found a home in Thailand, all because he took a chance.

“Nothing that I planned in life—from high school to law school—worked out the way I thought it would,” he said. “You never know when you’ll get an opportunity.”